Greetings, TURNcoats new and old! A new season of TURN will soon be upon us, which means it’s time to dust off the blog and get it fired up again.

Now wait just a minute. You didn’t think we were gone for good, did you? With a second season of TURN on the way amidst a sudden proliferation of (often highly-questionable) television programming about the American Revolution?!

The quiet off-season has officially come to an end. Even though we’re a good two months out from the premiere of Season 2, there’s been plenty of activity and recent buzz surrounding the new season of TURN. We’ve got lots of excellent historical analysis lined up, including a few gems inspired by questions sent by spy-curious readers via the “Ask a question” page. But we would be remiss if we didn’t first recap some of the most important TURN-related news. So in case you missed it, here’s a quick roundup of the more noteworthy headlines:

A TURN by any other name

It’s official: The show we all came to know as “TURN” last season is now “TURN: Washington’s Spies.” The switch actually happened just a few months after the Season 1 finale in June – but while this isn’t exactly late-breaking news, it’s worth acknowledging. The online reaction to the name change has been overwhelmingly positive — which isn’t all that surprising. “TURN: Washington’s Spies” is now instantly self-identified as a period espionage drama, whereas the all-too-postmodern “TURN” didn’t convey anything at all about the show itself. Ever since the beginning of our fair Republic, Americans have been name-dropping George Washington on all sorts of things to help drum up more popularity and support – so in one sense, “TURN: Washington’s Spies” is carrying on a fine American marketing tradition. (We’ll post more about that later.) Here on the blog, we’ll continue to refer to the show as “TURN“ in most cases, for brevity. (The average word count of our blog posts is high enough already!)

Playing Catchup: How to (re)watch Season 1

Those of us in the Northeast only have to look out the window at our snow-covered lawns to remind ourselves that it’s been many long months since the sunny days of June — and the season finale of TURN’s inaugural season. If you find yourself snowed in and/or yearning for the melodrama of the last season of TURN, there are many ways you can catch up — although they all require some form of monetary investment. We’ll post a link here if and when free streaming episodes become available on a legitimate website.

Filming for season two of TURN wrapped up the first week of February. According to AMC’s website promos, there are lots of new faces, including a pair of rather infamous troublemakers whose names should sound familiar even to viewers who haven’t picked up a history book since grade school. Benedict Arnold and Peggy Shippen, anyone?

A good deal of filming for Season 2 took place on-location at Colonial Williamsburg. CW’s blog has an excellent post (with pictures!) about the complicated logistics of filming a modern production in the midst of a sprawling historic campus that’s open to the public, and throws in some comparisons to the filming of HBO’s John Adams, which was also shot at Williamsburg. While the big, stately, Southern brick mansions found on the Duke of Gloucester Street aren’t exactly representative of 18th century New York architecture, we’ll leave the architectural analysis for a future blog post. At least filming for this particular Revolutionary War show is being done in an 18th century historic site here in the good old US of A, as opposed to, say… Romania. (I’m looking at you, History Channel’s “Sons of Liberty.”)

A meeting of the minds

Speaking of Williamsburg, a marvelous thing happened back on the evening of February 3rd: 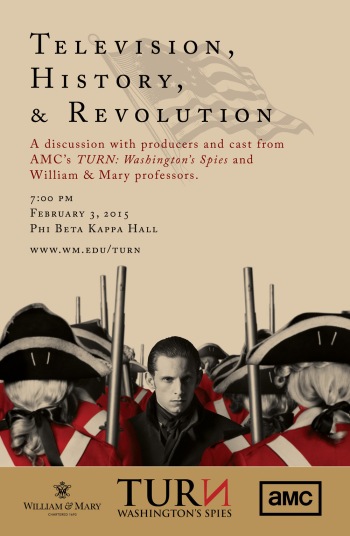 Hollywood producers and history professors… in the same room? Talking to each other? If only this kind of thing happened more often!  I have a hunch that this mini-symposium had something to do with Colonial Williamsburg requiring visiting film productions “to support the foundation’s educational mission” (a little detail mentioned in the aforementioned CW blog post). At any rate, it’s a very welcome opportunity to engage in a high-profile discussion of a widely-distributed historical drama.

Representing TURN on the stage were both of the show’s executive producers (Craig Silverstein, who has repeatedly claimed that TURN is “a true story,” and Barry Josephson) and Alexander Rose. Representing the hallowed halls of academia are a slew of professors of history, film, and American Studies from the College of William & Mary, including the current editor of the William & Mary Quarterly and the Director of the Omohundro Institute for Early American History. These are big names in the academic world, folks. If you were a graduate student you’d probably be a little weak in the knees after reading the full list.

Yes, gentle readers, I also thought this meeting of the minds was too good to be true — but thankfully, the event was not only real, it was recorded!  The edited video should be available for online viewing sometime in the near future. Clearly there were more than just graduate students in attendance: the RSVP list for the event topped out at over 600 people. We’ll share the link in a special post when it becomes available.

In the meantime, enjoy binge-watching Season 1 all over again. It’s good to be back!