Greetings, fans! Today we’re taking a peek at the TURN: Origins online comic, which was unveiled on the official show website last week. I recommend breezing through the comic yourself before reading the commentary below – it’s a quick read and won’t take long.

In recent years, a handful of cable television shows have produced graphic novels as bonus online content for fans (including Burn Notice on USA and Falling Skies on TNT). It looks like TURN is following suit, although it’s unclear at the time of this post whether this comic issue is a one-time promo or we’ll be seeing more in the future.

As a whole, the comic’s heavy-handed, rough style seems to complement the action and dramatic tension found in its pages (and leaves little for us to discuss about material culture, since the heavy pencil lines obscure most tiny details). Overall, the story drives two very important points home: 1) The future members of the Culper Spy Ring share a deep friendship that started when they were youngsters growing up together in Setauket, and 2) the American Revolution was a civil war that divided families and communities, sometimes to the point of turning on each other.

However, there’s good reason to believe we shouldn’t read too much into the comic as a representation of TURN’s approach to historical accuracy. For one thing, there’s a pretty glaring anachronism on the cover that’s not in any of the show’s promotional footage. (Besides Caleb Brewster’s pirate-y facial hair, that is… but that’ll be covered in a future post.) Can you spot it? 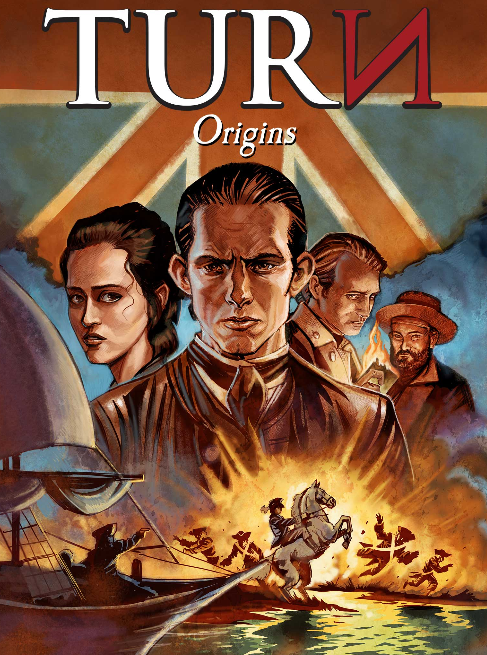 Is there a vexillologist in the house? Because the British flag that takes up the top half of the page is, quite frankly, the wrong one. The diagonal red stripe, representing Ireland, was not added to the British flag until 1801. In the 18th century, the British flag (commonly known as “the King’s Colours”) would have looked like the flag below:

Having the “wrong” Union Jack flying is a common error in historical movies, even though it’s a pretty basic fact to check. (See Pirates of the Caribbean, Disney’s Pocahontas, and 1776 the Musical for starters). But few of those big-budget historical productions tried to lay claim to the mantle of historical accuracy as much as TURN is. I have to admit – after seeing the comic book cover, I stopped everything and re-watched some of the TURN trailer footage for a quick flag-check:

Thankfully, in footage from the various trailers and featurettes available on the TURN website, we can very clearly see the King’s Colours flying. (Phew. That would have been kind of embarrassing.)

Okay, so there are evidently discrepancies between the online comic and TV show. Which is rather strange, especially since the writer LaToya Morgan is the show’s Executive Story Editor, but these things happen, I suppose. Because of that (and time/space constraints), I’ll only mention a few other big pointers here.

Here’s an example of a pretty big issue: On pages 4-5, we see Abraham Woodhull’s older brother Thomas donning a British uniform and going to fight “the rebels,” only to be killed either during or soon after the battles of Lexington and Concord. Pretty major plot device, from the looks of it. It’s also a pretty major fabrication on behalf of TURN’s scriptwriters, because Abraham didn’t have a brother named Thomas. Even according to Washington’s Spies, the book used as the basis for TURN, no such brother ever existed. (See page 304, note 48.) Abraham did have two older brothers, but they died in 1768 and 1774, respectively – long before the beginning of armed hostilities between American colonists and the British army. But having a martyr for the British Empire in the family sure adds a heck of a lot more drama, doesn’t it? Hmm…

Colonial colleges: On page 5, Abraham Woodhull says “I left for King’s College.” (Some historical trivia for you: After the American Revolution, King’s College changed its name to Columbia College, the precursor to today’s Columbia University.) He never attended King’s College… not as a student, anyway. Maybe he left to go sell them some vegetables from his farm? Admittedly, it’s a convenient fib that supports the grand narrative of the circle of friends growing up and going their separate ways. 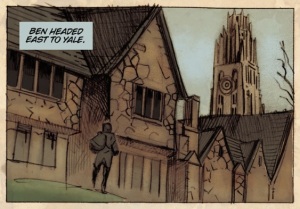 Benjamin Tallmadge did go off to Yale College, where he joined the class of 1773 alongside Nathan Hale and several other notable troublemakers. However, I doubt he was familiar with the sight of Yale as it appears in the first panel of page 5, unless he accidentally stepped through a wormhole and ended up in the 20th century. (The iconic Harkness Tower seen in the comic wasn’t completed until 1921.) Okay, I know, I know – that’s not really a big issue. It’s one panel. Yale in the American Revolution happens to be a topic that’s pretty near and dear to me (thanks, grad school!) and so it leaped off the page at me. For what it’s worth, if you’re interested in what Yale really DID look like in the 18th century, you can check out this period image of it.

Let’s see – aside from the story’s references to “bluecoats” (a popular anachronism that we’ll talk about later), the “Family Tree” of characters on page 18 has a few head-scratchers, most of which have to do with historical chronology and are unlikely (by my guess) to translate to the show. For example, Major John Andre isn’t appointed as the head of British intelligence until 1779, and Benjamin Tallmadge outgrew the rank of Captain by the end of 1776, so those two “statuses” wouldn’t occur at the same point in time. Robert Rogers’ descriptors are all over the place, chronologically speaking (as is his outfit, but that’s another discussion). We’ll have to wait and see if any of these chronological errors play out in the actual tv episodes.

Finally, Page 20: I don’t even know what to say about this one, guys. The outlandish artwork, the inaccurate style of wine glass, the outfit the man is wearing… not even CLOSE to 18th century standards. What was AMC thinking?!

(Yes, I’m kidding about that last one.)

So what’s your two cents on the TURN: Origins comic? Obviously there are liberties taken with the history, some larger than others. But on the other hand, it seems to hammer home major plot points pretty successfully. Feel free to leave your own comments below while I enroll myself in “Remedial Blogging, Part 1: Concise Blog Posts.” (I’m pretty sure I can find a free online course about that. Right?)

A few weeks ago, I took a leisurely day trip to New York City with friends who had recently moved to the area.  As I emerged from Grand Central Station, blinking in the bright sunlight after a good ninety minutes on the train, I almost thought I was hallucinating when the first thing I saw in front of me was a little picture of British soldiers in cocked hats sitting atop a yellow taxi.  Thankfully, I had my camera out when this bus drove by moments later:

(I think the “Pledge Defiance” banner running along the top of the bus is an especially nice touch.)

My own experience was corroborated by two other perceptive Connecticut friends of mine who had visited New York City in recent weeks. Nisreen spied another TURN bus, while Steve surreptitiously snapped a photo of an ad in a subway station. 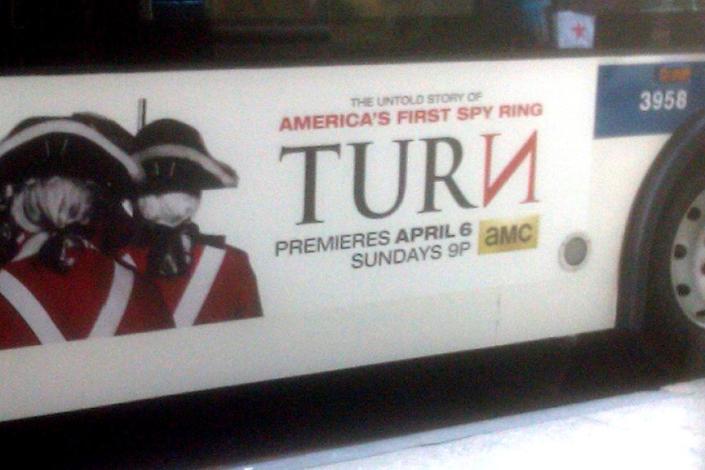 Over the course of the day, I saw many more ads for TURN on buses and taxis throughout the city — in fact, the only other TV show that seemed to be promoted more heavily than TURN in print advertising was HBO’s Game of Thrones.  Pretty fitting, since one of the show’s primary settings will likely be 18th century New York City, although you’d never know it from the ad itself.

If anyone else has spotted ads for TURN in their corner of the country, please share!  So far, this particular ad campaign guarantees that TURN is on the radar of literally millions of people in the New York City metro area.  Whether they’ll actually tune in for the April 6th premiere, however, remains to be seen.

Where to TURN to first?

Whether you’re a fan of early American history, epic television dramas, or both, I’m glad you’ve stumbled upon this humble historian’s dusty corner of the internet. I hope you’ll stick around and join the conversation here as AMC’s new show about the Revolutionary War unfolds over the next few months!

(If this is your first time here, welcome! Check out the About page, and maybe a Historical Resource or two. Put your feet up and stay awhile!)

Even though the premiere of TURN is still over a week away, there’s already plenty to talk about. The TURN team at AMC has been busy these past few weeks, releasing trailers, cast and set photos, behind-the-scenes featurettes, and even an online comic book! I encourage you to check out their entire horde of goodies on the official show website.

As a historian of Early America with a special focus on the American Revolution, I find myself in a curious situation in these final days before TURN’s official debut. I know what should happen in the show; I’ve studied the history; I’ve written and spoken about it at museums and academic conferences across the US.  But since TURN is an artistic dramatization of historical events and not a documentary, it’s anyone guess (including mine!) as to how faithfully the “real story” of the Culper Spy Ring will ultimately be represented in the show.  Unlike other blogs and press websites, this one has no connection with AMC whatsoever — no “courtesy” screenings or advance access to scripts, episode synopses, or other privileged information.  “TURN to a historian” a completely independent, third-party site, and so you’ll find historical analysis here that you won’t get in officially sanctioned press releases or pre-approved blog reviews.  After each episode airs, I’ll be able to help make the line between historical fact and Hollywood fiction clearer without feeling obligated to tone things down or pull any punches.

I hope you’ll have as much fun reading this blog as I know I’ll have writing it.  There’s an infinite number of directions that Hollywood can (and often does) take with factual history, and since AMC is hoping that TURN will be its next big hit, I wouldn’t be surprised to see them crank the drama up to 11 whenever they have the chance.  Stay tuned!

Now to all of you who are wondering “All right, enough stalling… when are you going to get to the GOOD stuff?” Mary Woodhull and I have one word for you:

The above picture is one of the many cast photos available on the official TURN website, and rest assured, we’ll be discussing it in full in the near future — both the good and the bad.  (Holy Civil War beards, Batman!)

For the past couple of weeks, as this blog has slowly taken shape on the internet, I’ve been wondering where to begin, since there are no episodes of TURN publicly available yet.  Earlier this week, AMC unveiled a new online graphic novel claiming to illustrate the origins of the Culper Spy Ring, and it looks to be a prime target of discussion. While I’m busy gathering down my own analytic take on it, you can read the comic for yourself here.  And what an interesting comic it is!  So check back soon for more updates — and don’t forget to TURN in for the show premiere on April 6th!