“Repulsed with Disgrace”: The Battle of Setauket

Just in time for the premiere of Season 2 of TURN: Washington’s Spies, we’ve got the real story behind the Battle of Setauket, the historical event that (very loosely) inspired the Season 1 finale. But wait… red-coated Continentals and green-coated Loyalists? How’s a TURN viewer supposed to tell the two sides apart? Thankfully, we’ve got a new post from Todd Braisted below to help set the record straight. He’s even dug up the story of a little-known likely British informant whose ability to blend in may have determined the battle’s outcome before the first boat set sail from Connecticut.  For more historically-accurate intrigue, read on — and don’t forget to tune into AMC tomorrow night for the two-hour premiere of Season 2!  -RS

The morning of August 22nd, 1777 dawned hot and humid over Long Island Sound. Through the early mist, vigilant sentries would have seen a small flotilla of different sized vessels approaching the area of Crane’s Neck, a jut of land northwest of the town of Setauket. In those vessels, sloops, whaleboats and other small craft, those same sentries would have espied scores of red coats, coming to surprise the garrison of Americans in the town. 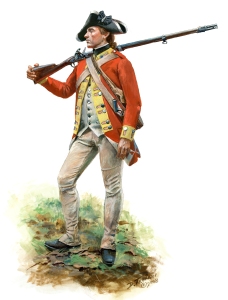 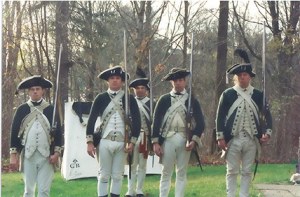 Reenactors dressed in the documented green and white uniforms worn by DeLancey’s Brigade.

When we last left our friends at TURN during the Season 1 finale, the British were holed up in a church in Setauket, Continental troops were trying to dislodge them, and the psychotically evil Simcoe was blowing some poor sod’s brains out.  This was their version of the Battle of Setauket, a real event which took place on 22 August 1777. Like most things in the show, however, what is seen on the screen is not exactly as it was in 1777.

The origins of what would become known as the Battle of Setauket started nearly a week before, when Major General Israel Putnam, commanding officer of the Continental troops guarding the Hudson Highlands, sent orders to Brigadier General Samuel Holden Parsons to gather up 400-500 Continentals from the troops under his command at Fairfield, Connecticut, joined to whatever number of Connecticut Militia he found necessary, as well as artillery, and “deplete and destroy” all parties of the enemy at Huntington and Setauket, Long Island. Besides the enemy, Parsons was to bring off or destroy all “military stores, magazines, provisions, forage or naval stores” found on Long Island. Finally, if all went swimmingly, he was to release all the U.S. officers held as prisoners on the island – which would have been no small task to accomplish, given that they were actually dozens of miles away in Brooklyn and Queens.

Parsons in turn placed the Continental troops, drawn from the Connecticut Line, under the command of Colonel Samuel B. Webb. Webb himself commanded one of the sixteen “additional regiments” of the Continental Army, so-called because they were over and above the quotas of regiments raised in specific states. Webb’s regiment would have certainly confused the majority of TURN viewers, because they were clothed in red coats with yellow facings – actual British uniforms captured en route to Canada. And given they would be fighting against green-coated Loyalists (as opposed to the red coated British depicted in the show), there is no doubt viewers without a deep knowledge of period military material culture would have been left scratching their heads trying to figure out what the hell was going on.

On the eve of the expedition, Parsons issued his orders, which in turn were read to the troops. The orders rather resembled a locker room pep talk, reminding the men of the “honor of our arms and the righteousness of our contest.” They were by no means to “distress the helpless women or honest citizen,” nor were they to plunder, leave their ranks, or talk on the march. Those violating these orders were told they would receive “the most exemplary punishment.”

One of the “militiamen” that may have been mingling amongst the gathering expedition in Fairfield was a short twenty-one year old with a contracted hand and crooked finger named Stephen Pangburn. With a musket and bayonet, and wearing a brown coat and other civilian clothes, Pangburn would have looked like any other militiaman, except he was in fact a soldier in the 3rd Battalion, DeLancey’s Brigade. Pangburn was not a spy, but rather an escaped prisoner of war, captured in a raid on Sag Harbor the previous May. Lodged in a private home in Suffield, CT to assist with labor, Pangburn escaped with the arms of the house on 10 August 1777 and apparently traveled the 75 or so miles south to Fairfield, where he would have seen all the preparations for the expedition. Stealing a boat or perhaps hitching a ride with a Loyalist heading to Long Island, Pangburn returned to Setauket – and his battalion – on August 20th and no doubt gave complete intelligence of what was headed their way. Parsons’ element of surprise was gone.

While the strategic surprise was gone, the actual timing was still unknown, so when Parsons’ troops landed on Crane’s Neck, Lieutenant Colonel Richard Hewlett and his men belonging to DeLancey’s Brigade were not entirely ready to receive them. To be sure, Hewlett had taken great pains to fortify himself as best he could. The Presbyterian Church in town was indeed fortified as seen in the show – but not with gravestones.  The church had an earthen breastwork thrown around it, six feet high by six feet wide and thirty feet from the building itself, in which were mounted four swivel guns – very light artillery pieces meant for short range work. The church and the earthworks would safely accommodate Hewlett and his green-coated garrison. Where Hewlett fell short was in removing his sick men from town.  It must have been a chaotic scene, with the ill and injured making their way, running, stumbling, limping to the church while under fire, and some of the town’s residents pointing out their whereabouts to the invaders.

When all of Parsons’ troops assembled – 749 by one count, including Caleb Brewster – the general sent a summons to Colonel Hewlett, demanding the post be surrendered “to prevent the effusion of human blood.” The Loyalist officer, who had previously sent word of the invasion to his commander Brigadier General Oliver DeLancey at Huntington, sought to play for time to allow reinforcements to arrive. Hewlett sent his compliment to Parsons, and requested thirty minutes to consult with his officers on the matter. Parsons granted but ten minutes, when he received the reply that Hewlett “is determined to defend his post while he has a man left.” The battle was on.

After all the huffing and puffing, it was not much of a battle. Parsons opened fire with his artillery, which was returned by the Loyalists. There was no great charge, or glorious repulse. Some men were hit on both sides, by one American account Parsons himself was wounded in the left arm. Two Loyalists, Chambers Townsend and John Wilson, both privates in DeLancey’s, were killed in the fighting. At least one soldier under Webb was hit, and Loyalist newspapers reported “great quantities of blood [were] found on the ground the rebels occupied.”

After all of three hours in the town, the firing ceased. No drama was forthcoming. Both sides were probably uncomfortably hot and tired. What was envisioned by Israel Putnam as a dramatic sweep through Suffolk County was over after it had barely begun. Parsons embarked and returned to Connecticut with his trophies: some blankets and the horses of Lieutenant Colonel Hewlett and his officers. The reinforcements sent to Hewlett’s relief, some men from the 1st Battalion DeLancey’s and Queens County Militia, never even made it to town before Parsons was safely sailing back across the Sound.

So why the hasty departure? The reason sometimes given by the Americans was that British armed vessels were in route to trap the invaders on the island, although no such ships were ever sent. The army gave the reason that their artillery fire was ineffectual against the works surrounding the church and that sound of battle would draw British reinforcements from all over. Captain Frederick Mackenzie of the British Adjutant General’s Department made note in his journal of a final letter sent by Parsons to Hewlett. Mackenzie would only comment that the entire exchange was “somewhat curious,” before transcribing in his journal: “General Parsons’s Compliments to Colonel Hewlett, and should have been happy to have done himself the pleasure of paying him a longer visit, but the extreme heat of the weather prevents him.”

For their part, the British were very pleased with the conduct of the Setauket garrison. Sir Henry Clinton, commanding at New York, issued orders saying he “desired particularly to Express his Approbation of the Spirited behaviour and good Conduct of Lieutenant Colonel Hewlet, and the Officers and Men under his Command in defence of the Redoubts at Satauket on Long Island, in which Lieutenant Coll. Hewlet was attacked by a large body of the enemy with Cannon, whom he repulsed with disgrace.”

It should be noted that, purely by coincidence, there ended up being three major attacks on the British around New York City that day, all completely coincidental and entirely uncoordinated. That fact of course was not known by the British. Some of Hewlett’s compatriots in the 2nd Battalion of DeLancey’s were engaged in fierce though small fight at Valentine’s Hill, north of Kingsbridge, who likewise drove off their attackers. Most seriously, two thousand Continentals under Major General John Sullivan landed on Staten Island, capturing about 130 Loyalist New Jersey Volunteers, but losing over 270 badly needed troops intended to reinforce Washington in Pennsylvania. And speaking of Pennsylvania… At the time of the Battle of Setauket, Captain John Graves Simcoe of the 40th Regiment of Foot was at that moment on board a transport ship with the rest of Sir William Howe’s Army nearing the Head of Elk, Maryland. It is not believe the captain arbitrarily executed any civilians on board during the voyage.

Todd W. Braisted is an author and researcher of Loyalist military studies. His primary focus is on Loyalist military personnel, infrastructure and campaigns throughout North America. Since 1979, Braisted has amassed and transcribed over 40,000 pages of Loyalist and related material from archives and private collections around the world. He has authored numerous journal articles and books, as well as appearing as a guest historian on episodes of Who Do You Think You Are? (CBC) and History Detectives (PBS). He is the creator of the Online Institute for Advanced Loyalist Studies (royalprovincial.com), the largest website dedicated to the subject.  Braisted is a Fellow in the Company of Military Historians, Honorary Vice President of the United Empire Loyalist Association of Canada, and a past-president of the Bergen County Historical Society. His newest book, Grand Forage 1778: The Revolutionary War’s Forgotten Campaign, will be published in 2016.